Amy Kroker (née Wong), Ph.D. (born November or December 2979)[1] is the wife of Kif Kroker, and a member of the Planet Express delivery service.

Amy used to be rather overweight as a child because she had an insatiable appetite. She was later able to lose all the weight and is currently able to control herself as an adult. However, she can lose control very easily such as in "The Prisoner of Benda" where she reverted to becoming fat and put Leela's body in bad shape when they switched bodies.

Amy is a young Mars University student who divides her time between her studies as an engineering student and her internship at Planet Express - a post she got because she happens to be the same blood type as Professor Hubert J. Farnsworth.[2] In the episode "That Darn Katz!", Amy received her doctorate in Applied Physics after being an intern at Planet Express for 12 years, which Professor Farnsworth remarks she was ready 6 years ago but he forgot to tell her.

Amy's parents, Leo and Inez Wong, own Mars' entire western hemisphere, the best hemisphere on Mars, according to Leo. They make their fortune raising buggalo, a breed of livestock found on Mars. They have made a number of donations to Mars University to further Amy's position in the school, so much so that she is a member of the sorority Kappa Kappa Wong. They are extremely hopeful in their request that she marry and provide them with grandchildren.[3]

The owner of an extensive and impressive wardrobe, Amy is normally seen in a light pink sweatsuit that exposes her midriff and belly button, in an attempt to mimic the son her father always wanted, as seen in "Into The Wild Green Yonder". Another reason, as shown in "Put Your Head On My Shoulder" is to annoy her parents, as they want her to be more ladylike.

While she is not attractive by conventional standards but friendly, and empathetic, Amy has dated numerous men, including Fry, but hardly any of them took her seriously.[4] The men that dated her have rarely seen her as more than a casual fling, including Fry. Fry has twice pretended to be Amy's boyfriend in order to save face with her parents. The first time was in "A Flight to Remember", where Amy claimed Fry was her boyfriend to prevent her parents from setting her up with people she wasn't attracted to. The second time was during "Proposition Infinity", in an attempt to convince Amy's parents that she was no longer robosexual. She has also dated Bender, even being physically intimate with him, and nearly married him in that same episode. However, Bender left her at the end of the episode because Amy wanted a monogamous relationship. She has also shown interest in other women, like when she kissed Leela in "Bender's Game," implying that she may be bisexual. Her interstellar travels with Planet Express allowed her to meet males of other species, such as a being of pure energy, M5438,[5] until she married the shy, squishy, good-hearted green Amphibiosan Lieutenant Kif Kroker.[6] In The Beast with a Billion Backs, she slept with his commanding officer Zapp Brannigan, who took advantage of her grief after Kif's death. After being revived, Kif was initially unwilling to take her back after he learned that Amy had slept with Zapp. They eventually fixed their relationship, and Kif went with her and the rest of the Planet Express crew into the Panama wormhole.[7] In Proposition Infinity, Kif left Amy because she was flirting with bad boys, which made Kif feel insecure and like Amy wasn't taking their relationship seriously. In the same episode she dated Bender and they campaigned to make Robosexuality (sexual relationships between humans and robots) legal, and win the right for marriage. They won their case, but Bender dumped her after finding out that Amy wanted a monogamous relationship. Kif then goes to her home on a motorcycle and wearing leather and dark shades. He revved it up to impress her, and then took her back, riding off into the sunset with her.

Amy speaks multiple languages including Yeti,[8] and she often swears in Cantonese. She also adds extra consonants to certain words or even substitutes consonants, such as "smeesh" (a variant of the exclamation "sheesh!"). Additionally, while not very fluent, she can speak a bit of Martian. For example, "Aieyah! Jung lei! ngo da sei lei!" in Cantonese slang translates to: "Good Grief, I hate you! I will beat you senseless!" (Despite roughly translating to "Gah! I hate you! I will beat you to death!") In the episode "Amazon Women in the Mood", Amy angrily twists Bender's arm when he refuses to help reprogram the Femputer, saying "Fa te fung chi gu li da si ne!" which means in Cantonese: "You better do it or I'll kill you!".

Amy is a klutzy girly-girl who likes to party a lot. She is kind of spoiled due to her parents being rich and she once had a time where she used to look down on the poor. She has a sense of justice and patriotism, but gets frustrated when in desperate and hard situations. She constantly gets guilt-ridden and is always naive, falling for many things, including when she thought that Fry was actually interested in her, which he never was. Amy is also bad at placing and losing things such as failing to hide her wallet in her pocket fully only to have it stolen by people like Bender. She is rebellious against her parents in their many immoral schemes, once even to destroy twelve percent of the Milky Way to build a giant "mini-golf course".

Her star sign is Sagittarius, according to Ethan "Bubblegum" Tate, which puts her birth date in late November or early to mid December.

Amy appears in all but five episodes of the series: 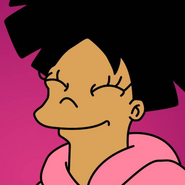 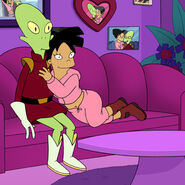 Amy is a dude

Amy as her younger self