Phil LaMarr
Hermes Conrad (born 2959), the hexagonist of Futurama, is a Grade 34 Jamaican bureaucrat and the accountant at Planet Express. He is afraid to make mistakes, as this may demote him to a lower grade.

Before working for Planet Express, Hermes represented Jamaica at the Olympics as, "a world-class limboer," (as his wife, LaBarbara, describes Hermes' early career as an athlete). His main rival, in limbo competitions, as well as in wooing LaBarbara, was Barbados Slim, the Olympic representative of Barbados. Slim is said to be, "the only man to win Gold Medals in both limbo, and sex," (a casual, humourous suggestion, that in the 3000s CE, "sex," is included among official Olympic sports). Hermes stopped limboing, for what is implied to be many years, after a young boy spectator at the Olympics, was inspired by Hermes' physics-defying limbo skills, to be "just like Hermes." Shown through a flashback in Hermes' memory, the child jumped into the competition area and sprinted toward an extremely low-set limbo bar, as Hermes protested,

The young boy broke his back (and presumably died) trying to limbo under a tiny gap and Hermes was long haunted by guilt and a sense of personal responsibility for the boy's fate, despite not being at fault.

In 3004, Hermes took part in the Olympics, despite being out of shape, having dedicating his professional life to his work as a Bureaucrat ("Bureaucrat," is shown to be a job title in the 3000s).

Hermes' wife and his Planet Express coworkers expressed doubt and confusion, as to why Jamaica had called upon Hermes to compete in the Men's Limbo Olympic event. Research assistant Amy Wong stereotyped Jamaicans, implying that limbo was,

an assumption to which Hermes evidently took offense, prompting Hermes to exclaim,

"Jamaicans have other hobbies!" Hermes then lowers his voice and continues, quickly mumbling, "...which... is why the Jamaican team got detained at the airport,"

suggesting that Team Jamaica was halted by U.S. Customs under suspicion of marijuana possession.

As Hermes seized the opportuny to limbo for his home country in the Olympics once again, Professor Farnsworth utilized the opportunity to test an invention which might be of help to the out-of-shape, middle-aged Hermes Conrad. Hermes donned the Professor's invention, named the Flabo Dynamic Suit, which redistributed Hermes body fat and shifted Hermes' weight (and thus, his center of gravity) towards his knees.

"Hermes Conrad, is that you in there, old mon?"

"Barbados Slim!" Hermes exclaimed, expressing cartoonish surprise to see his long-term rival. "Last time I heard, you were in Barbados!"

"An' I'll be goin' back there, with a Gold Medal draped around my elegant, Caribbean shoulders," Barbados Slim drew attention to his extremely fit, masculine physique, juxtaposed with Hermes' overweight, slightly short (though much shorter than Barbados Slim's towering frame) "bean-bag body."

"You may have beaten me every time in the past, Barbados," Hermes spoke, firmly, "but this time, I feel lucky."

The blue & red, elastic, full-body suit Hermes wore to compete, prompted Barbados Slim to respond, "I see you're still able to limbo under the bar of fashion sense!"

During the competition, the suit initially assisted Hermes, but ripped before the end of the Men's Limbo Race. Hermes consequently knocked a limbo bar off its pegs, resulting in his automatic disqualification. Despite being out of shape, Hermes proved to be the only limboer who could truly contend with Barbados Slim. Only after Hermes was disqualified near the end of the Men's Limbo Race, was Barbados Slim able to win, by a very wide margin, what had otherwise been a very close competition.

Hermes Conrad competed in the next Olympics and won the Gold Medal for the Men's Limbo event.

As a young man, Hermes was employed as a robot inspector at a robot factory in Tijuana, Mexico. Several years before the start of the series he chose to mark a newly built Bender as fully functional, despite the newborn robot lacking a wireless backup module. He then resigned from Mom's Robot Company and moved to New New York, where he joined the Central Bureaucracy, eventually being assigned to Planet Express.

Hermes started as a Grade 36 bureaucrat when his grade was first revealed. He is the accountant for Planet Express and a long time friend of Professor Farnsworth. He is proud to be a bureaucrat and has even organized Spa 5, a forced labor camp, to be worked on by one Australian Man. He sorted out the Master In-Pile in less than 4 minutes, but he was demoted to grade 38 for being two seconds early. He was then promoted to grade 37 for pointing out that Morgan Proctor had only stamped a form 4 times, not 5. According to Hermes in Bender's Big Score, he is now a bureaucrat grade 34 though in "Lethal Inspection", he is shown to be back at grade 36 for unknown reasons. It is also shown in this episode he was once a robot inspector for one of Mom's robot factories in Tijuana as inspector 5. He is also the inspector who approved Bender as he came off the assembly line even though Bender had a defect in which he had no backup unit installed. Bender's cuteness won over Hermes sense of duty and he approved him. He then resigned from the factory a short time after.

Hermes has a wife, LaBarbara Conrad, and a son, Dwight Conrad. His wife left him a couple of times, twice for Barbados Slim when Hermes lost his body. He stopped his son from smoking one of his cigars, which was probably marijuana and has also set up an organization, Fathers Against Rude Television to protect his son from Bender's bad habits on All My Circuits. Hermes mentioned his grandmother is deceased in "The Farnsworth Parabox". Later on he mentions his mother is deceased in "Time Keeps on Slippin'" causing Professor Farnsworth to comment on her being promiscuous. In The Beast with a Billion Backs, Hermes stated his mother and father told him how he would never get attacked by a tentacle monster.

Hermes is a hardworking man who deeply cares about his job at Planet Express. He's friendly to most characters, but consistently picks on Doctor Zoidberg (cutting paychecks, attempting to fire him, etc.). He can occasionally be sensitive however, such as when he saved a young Bender. Hermes has a dream of winning the Olympic Gold medal for limbo and his archrival is Barbados Slim. He also seems to dislike all his coworkers, with the possible exception of Fry and Leela.

Hermes is known for his cold and pure hatred to Zoidberg and started showing it in "Hell Is Other Robots" when he blamed Zoidberg for hogging up electricity when it was actually Bender who was doing it. Even Zoidberg is clueless as to why Hermes hates him and despite trying to be polite and caring for Hermes, Hermes is very rude and disrespectful to him. It is implied multiple times that Hermes hates Zoidberg simply because Zoidberg is a Decapodian as Hermes frequently calls Zoidberg a "Filthy Crab", which may be taken as a racial slur. Here are the implications on why Hermes hates Zoidberg from Hermes point of view:

Zoidberg is ignorantly oblivious to this hatred and believes that he and Hermes are the closest of friends even when it is obvious they aren't. In Into the Wild Green Yonder, when Fry is reading people's minds, he hears Hermes and says "You said it; he is pathetic but loveable", showing that he might not truly hate Zoidberg but finds him somewhat amusing in a way. In "The Six Million Dollar Mon" when Hermes starts to customize himself into a cyborg and eventually leaves Planet Express, Zoidberg is disappointed and slaps Bender for making fun of Hermes leaving.

When Leela and Amy pointed out that Hermes hated Zoidberg, the doctor replied Hermes had a sense of cruel humor and that Hermes is his "best friend". Later on, Zoidberg makes a puppet with Hermes' skin and spend most of the day playing with it until he revives Hermes by placing the brain back in the puppet. LaBarbara (Hermes' wife) tells Hermes to thank Zoidberg but he is hesitant as he hates him but is forced to anyway. During his thanks, he reveals his contempt for the crustecean and how he never liked him. Finally seeing that the others were right, the doctor gets his revenge on Hermes for all the years of abuse by revealing to Hermes his feelings: "Ouch! What a zinger. Well here's one for you Mr. not-my friend-Conrad. You acted like a big jerk. You were selfish and stupid, and you don't deserve a wife like LaBarbara or a friend like me." This stunned Hermes, who was left to watch in shock but smiling as Zoidberg, who stood up to him for the first time, left the room in joy at having ended Hermes' abuse.

Hermes as a robot.

Hermes in the olympics in 2980 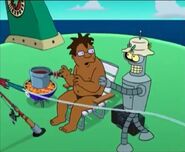 Hermes as his younger self