Professor Hubert J. Farnsworth (born April 9, 2841), better known as Professor Farnsworth, Professor or just Farnsworth, is the chief executive officer and a shareholder of Planet Express and the tetragonist of Futurama.

He is pushing the limits of even the 31st Century at an agе of well over 160. Professor Farnsworth is one of six living relatives of Philip J. Fry, together with his own clone, Cubert J. Farnsworth, as well as his only son by means of his sexual relations with Carol Miller while he worked for her, Igner. He has a brother named Floyd, also his parents Velma and Ned Farnsworth are still alive. He is Fry's nephew thirty times removed.

Though never stated, it's likely he is the descendant of Yancy Fry, Jr, through Yancy's only known child Philip J. Fry II named after his uncle. However, since it's revealed that Fry is his own grandfather and therefore Yancy's grandfather, as well as Philip II's great-grandfather, due to his time-traveling exploits, Professor Farnsworth is logically, in fact, Fry's direct descendant via his brother/grandson/great-uncle Yancy Jr. and nephew/great-grandson Philip II. So the six include: himself, Cubert, Igner, Floyd, Velma, and Ned.

Professor Farnsworth was born in April 9, 2841 to Ned and Velma Farnsworth.

When he was a teenager, he showed great promise in science at an early age, and was accepted to MIT at 14. However, his parents determined that he wasn't mature enough for college and brought him to live on a remote farm, "a hundred miles from the nearest microscope."

Young Hubert was mentally unstable and went mad, despite his parents' attempts to keep him calm. He had a total breakdown, and was given a "full wackademic scholarship" at a mental institution, but was released only 25 years later. "It was like a minute compared to grad school!"

Professor Farnsworth has worked for Mom's Friendly Robot Company (several times) and taught at Mars University. He spends the majority of his time partially completing various inventions, many of which defy the known laws of physics.

His primary function seems to be sending delivery crews to their doom. This act is invariably foreshadowed by the Professor shouting the words "Good news, everyone!"

His lab coat size is XX-Bony (The Tip of the Zoidberg).

Hubert's greatest ability is his exceptional intelligence: however, it is hampered by his senility. He does have more unusual "abilities" though: Since Fry's existence is cyclical and being part of Fry's bloodline, Hubert himself is an anomaly in the universe. Also, ever since "The Late Philip J. Fry", Hubert has become an out-of-universe observer. It is unknown how this may manifest itself in the future, but logically nothing that happens as a result of time travel in the current universe can affect him, since he is not a part of this universe.

For some unexplained reason, his eyes are never seen. There are only two episodes in which he has ever taken his glasses off. In the episode "Mother's Day", he is shown from the side when he does it and Carol comments "Your eyes were always such a beautiful shade of... milky white." (still not giving away the specific color of his eyes).

In the episode "Amazon Women in the Mood", he removes his glasses after Fry mistakenly states that Zoidberg is dead (though the "corpse" is only Zoidberg's empty shell) but promptly covers his eyes with his hand in order to sob.

Professor Farnsworth is characterized by his catch-phrase "Good news, everyone!" frequently followed by very bad news: often one of his semi-suicidal missions.

Another is his exclamation of surprise, "Sweet Zombie Jesus!", which is noted to be clumsily censored on some networks. Also, though not a catchphrase in general, he often says "Wha?" when unaware of the situation, or when someone questions a statement he has just made, showing his senility. He often completely contradicts himself: he told his crew they were to gather "ordinary honey. Just ordinary honey." When one of his crew asked about the mission, he suddenly turned serious and said: "This is no ordinary honey!"

Another catchphrase he uses is "...Wernstrom!", which he spits out whenever he sees Professor Ogden Wernstrom, his scientific rival.

The Professor is always fatigued and generally infirm due to extreme age, so naturally, he sometimes ducks out of missions with the words "Well, I am already in my pajamas....."

Professor Farnsworth's amazingly advanced age manifests itself in senility and general physical decrepitude. While generally friendly, he is sometimes prone to sudden fits of bitter contempt for random things, as well as a severely compromised memory.

The Professor is also known for his inclination toward exhibitionism and does not hesitate to appear naked in public, stating that, like pine trees and poodles, the "primitive notions of modesty" of the 20th century are long gone. He also mentions that, being 160-years-old, he is old enough to rent and purchase "ultra-porn". Beyond that, the professor's occasional brief verbal digressions about his own life imply a somewhat colorful sexual past, which often trail off with a nostalgic "Oh yes..." He also mentions in Bender's Game that people sometimes call him "The Catman" for his ability to land perfectly on his feet after falling from a high balcony.

Professor Farnsworth is the oldest human being living on earth (excluding those who have been cryogenically frozen or are kept alive as heads in jars), a title he acquired upon turning 160. At this age, all humans are collected by the Sunset Squad Robots and sent to live out the rest of their days in isolation aboard the gigantic Near Death Star.

After his crew rescues him, Hubert returns to Planet Express to resume the life he originally had before being removed by the Sunset Robot Squad.

After swimming in the Fountain of Aging, he reports that he is "Even older! Huzzahhh!". This even more advanced age is not disclosed.

Although being in his 160s, in Leela's dreamverse in the episode "The Sting", the Professor became quite shocked when Fry, who was technically 1025-years-old after being frozen for a millennium, accidentally died, remarking, "This makes me the oldest living member of my family!" and burst into tears at this realization.

This is contradicted when we later learn that both of his parents are still alive in the 7th season episode "Near-Death Wish". However, this may be because the Professor loathed his parents("Near-Death Wish") and tries to ignore their existence.

Relationship with his crew

Professor Farnsworth rarely worries about the safety of the crew, viewing them as an expendable means to an end. After remarking that he was looking for a new crew for his intergalactic space ship, he was asked "what happened to your old crew?" His response was "Oh, those poor sons of b...but that's not important! What is important is that I need a new crew!"

When Fry, Leela, and Bender state that they have no career chips, he produces them from a bag labeled "Contents of Space Wasp's Stomach". He quite frequently sends them on dangerous missions even when he has the foreknowledge that they will probably not make it back alive. His missions are typically those that other delivery companies won't undertake, such as delivering subpoenas to mob-controlled worlds or casual deliveries to virus-infested planets. When the crew was sent to retrieve space honey, they found the remains of the previous Planet Express ship buried in the hive's honey.

Even the Professor's slickly produced video commercial for his delivery company makes several remarks to this effect, including, "When other companies aren't crazy or foolhardy enough..." and "our crew is expendable, your package isn't", the former showing the crewman running through a minefield and the latter a crewman being dragged away by a giant bird.

When the crew and his ship are sent off to war, he immediately tries to hire another crew. When his old crew returns, he is clearly surprised they survived, remarking, "Oh God you're alive! I mean, thank God you're alive," then remarks to the applicants, "Come back in three days. A week at the most."

Even his family relationship to Fry doesn't do much, if anything, to reduce his ardor for particularly difficult and deadly delivery missions. His relationship is closest to John A. Zoidberg who he values a good long time friend although Hubert is a speciesist.

He employs John Z. because Hubert once saved his life from a yeti and at this time, Hubert was infected with Yetiism, which he mistook for hypermalaria. He made John promise to mercy kill Hubert so he would not die of it, and therefore John was employed by Hubert for the sole purpose of carrying out this task.

While at MomCorp, he fell in love with the CEO, Carol Miller. Igner was born of this relationship. Hubert left Carol and MomCorp when she decided to weaponize his Q. T. McWhiskers toy, an anthropomorphic cat toy that shot rainbows from its eyes.

He and Carol have had continued relations since this time. In a plot to retrieve the Universal Robot Controller from Carol's bra, the Professor brings flowers to Carol's cabin in The Bronx where their love is rekindled ending in a "whirlwind of hot, dry sex". After learning of the plot Carol subsequently dumps him. Even so, Farnsworth still loves Carol and is devastated over the fallout.

In the episode, Proposition Infinity, the professor reveals he met a girl by the name of Eunice, whom he fell in love with. After dating for 40 years, she cheated on him with a robot. Later in the episode, he reveals that Eunice's true name was Unit 47, revealing that he is a robosexual and explaining his hate for them.

Though knowledgeable and prodigious inventor, Professor Farnsworth is also plagued by intermittent senility. In contrast to his endearingly inept persona and while he's generally friendly mild-mannered, he has several negative character traits. These include arrogance, spitefulness, as well as a general disregard towards his employees and at times, a tendency towards speciesism, especially towards Cygnoids. Being a scientist, Hubert is an active defender of scientific progress and education, as well as is prone to be aggressive towards anyone who express esoteric or religious viewpoints that contradicts his own opinion: as evident in "The Thief of Baghead" when he angrily claimed that life-force isn't the same as an ethereal soul (though he seems to not known the difference between one another, if any) and in "A Clockwork Origin", Hubert claimed that anyone that believes in creaturism over evolution to be ignorant and went as far as to leave Earth when they refused to listen or see his theories and archaeological evidence. Despite this, Hubert is far from being Atheist. Rather, his spiritual faith seems to change from episode to episode, but (and perhaps due to it) is generally a liberal one. In "The Farnsworth Parabox", when one of his experiments goes awry and nearly killed him, he starts to desperately scream for help and shouts to several deities of different religions to do so, at one time asking Satan to save him because he owes him one. In another episode, he says "Hail Science" with 666 across his forehead. In "Hell Is Other Robots", Hubert claimed that Voodoo and Oprahism are mainstream religions and expresses interest in them. In "Möbius Dick", when he comes to the conclusion that his crew has died on their mission, he decided to pray to Isis.

Also, Hubert has shown tendencies for nudism in "Near-Death Wish" when the Professor yells at his parents, then proceeds to strip and run through the city naked. This is expanded on in "Anthology of Interest I by Hermes: "Let's see, Citation for public nudity, Conspiracy to commit public nudity..." 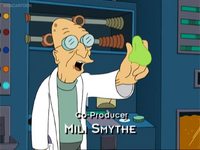 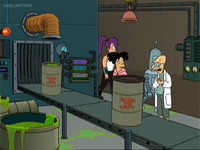 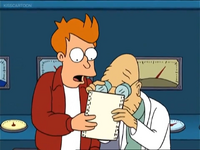 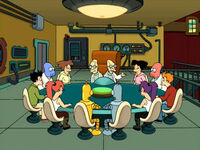 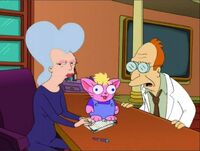 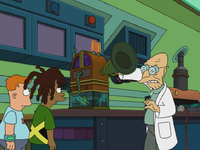 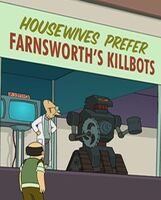 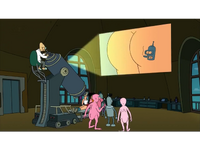 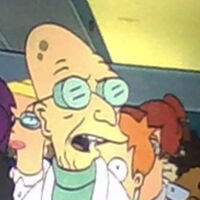 Farnsworth with Cubert in the background