Lord Nibbler (born 274 BCE), known mostly just as Nibbler ( though discovered on the Planet Vergon 6 by Bender, Fry, and Leela, just before its destruction) is a Nibblonian who has existed since the beginning of time.

On December 31st, 1999, Nibbler was responsible for pushing Fry into the Cryogenic tube, which brought him a millennium into the future so that he would be present to stop the Brain Spawn when they attacked Earth. He also made the prank call for I.C. Weiner.[1]

For the next thousand years, Nibbler was stationed on the planet Vergon 6 as Supreme Fuzzler, which was an ancient depository of Nibblonian fecal matter, also known as Dark Matter. Leela was unaware of his true nature.[2]

When the Brain Spawn surfaced to attack Earth, Nibbler helped defeat them, but was careful to wipe the memory of the Planet Express crew, although he forgot to do the same after the events of Bender's Big Score.

Nibbler spoke out passionately, but futilely, against the use of the Time Code when it was discovered on Fry's butt by the Nudist Alien Scammers. In the end, he advises everyone to get out of the universe as that same universe splits open and the Anomaly appears in the sky.

When Walt, Larry, and Igner infiltrate Planet Express to find the Anti-Backwards Crystal, they kidnapped Nibbler and imprisoned him with the rest of the Nibblonian population in Mom's Dark Matter Mine. His hellish imprisonment of being force-fed chickens and prune juice, while having his excrement harvested for fuel, was ended when the dark matter was made unusable as fuel, only to be utilized by Professor Hubert J. Farnsworth's brilliant replacement for the starship fuel: Nibbler Power.

He also appears in the episode "That Darn Katz!" when he breaks up with Leela as her pet and becomes part of the Planet Express crew. Later on, when Amy Wong presents her thesis at Mars University, a cat sneaks aboard the Planet Express ship and hypnotizes the crew. Later on, this cat summons a saucer which other cats arrive on. Amy is allergic to cats and Nibbler is jealous, so they are the only ones not hypnotized. The crew and the cats have something going on in the basement where only ones with a cat can help and see. Amy and Nibbler sneak in and find out they are trying to stop Earth's rotation and transfer it to the cat's homeworld, Thuban 9. Once they stop it by getting a static charge from 50,000 cats rubbing against the surface, they return home and celebrate. Amy later uses her thesis to start the Earth again in the other direction. This takes away the rotation of Thuban 9 and Nibbler becomes Leela's pet again.

Nibbler is a biped, about a foot tall, with black fur, long arms, stubby legs, as well as a proportionally large head. He has two large eyes embedded in his skull and a small third eye on the end of a stalk that protrudes from the top of his head and only one nostril on his nose. He has large fangs and a surprisingly wide mouth, making him capable of eating any creature regardless of its size. He wears yellow shoes, a white diaper, and a red cape. He excretes small but super-dense round pellets of dark matter, though he's light enough for humans to easily pick up. These traits are assumed to be standard for all Nibblonians.

Nibbler produces high-pitched grunting and gurgling noises, apparently in a meaningless babble. This is, in fact, his native language. However, for the benefit of not-Nibblonians to whom he wishes to communicate, as well as the viewing audience, he can speak in coherent English, which he delivers in a deep, oratorical voice, befitting his personality and status as a lord. He is usually seen wearing a diaper and a red cape given to him by his owner, Turanga Leela.

Persona Around Other Species

Upon adopting him, the lonely Leela quickly and incorrectly surmised that Nibbler was a defenseless, cute and stupid animal with an enormous appetite. Leela reinforced this opinion by dressing Nibbler in a baby's diaper and adorning him with a red cape.

As a result, some employees of Planet Express showered Nibbler with attention and affection as if he were a baby. This occurs much to the anger of the attention-seeking Bender, who subsequently despises Nibbler and constantly seeks ways of having him murdered or lost. Nibbler once bit Bender's shiny metal ass!

It's later revealed that Nibbler and his species, Nibblonians, are an ancient race of advanced beings who protect the universe from harm using an array of amazing and mysterious powers. This includes protecting Fry, who has a great destiny that must be fulfilled: Nibbler engineered his cryogenic suspension so he would be alive at the right time. Though this may seem to be a retcon, Nibbler's shadow is visible as Fry falls off his chair in the first episode and also in other versions of the same scene such as his third eye poking out of the trash and both his and Fry's shadow appearing when Fry falls off his chair in "The Why of Fry".

In "Anthology of Interest I" (non-canon), Nibbler was slain by Leela killing him with a sword after turning off the lights. Nibbler died after he was killed and, later in the episode, he likely was revived. 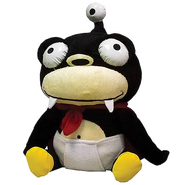 Nibbler without his diaper.

Lord Nibbler In His Space Suit