An alien who does not understand the concept of gender conducts experiments on the crew, changing all their genders.

The episode begins with the Planet Express Crew counting down to bankruptcy. As Hermes declares them officially bankrupt, Professor Farnsworth bursts in clutching an envelope declaring Planet Express to be back in business. As the crew prepares to deliver the envelope it is revealed that it is actually addressed to the Professor who congratulates them on a job well done before opening the envelope. On reading the letter, he declares them all to be incompetent. Hermes finds a 'loophole' in the mortgage saying if they actually pay it they can keep the building (but need eleven million dollars to do so).

The Professor tells everyone to prepare to move out to their new home under the bridge and orders Leela and Amy to pack lunches while the men reminisce and smoke cigars. The two women refuse to pack lunches, saying it was the men that drove the company into the ground blaming Fry's idea of delivering packages for free. Amy says "If you want to save this company, you should listen to a woman's idea for once." Then when prompted Leela comes up with the idea of turning Planet Express into an airline. Bender, however, imitates Amy's voice proposing a Planet Express 'girly' calendar.

Leela and Amy refuse to pose topless but have to change their minds when Hermes declares that it is in their contract, in fact it's in everyone's contract that 'all female employees must pose nude if requested'. Due to the low number of female employees (only two) Hermes hires his wife LaBarbara. After the photoshoot, Amy wearing a skimpy lab coat and tight clothes, Leela going topless and wearing suspenders and space helmet, while LaBarbara wearing another skimpy outfit, that was taken using Bender as the camera, the Professor dismisses the idea saying that they still don't have enough female employees reverting back to Leela's idea of an Airline company, but claims the idea to be his own.

Plan Am is launched and Fry and Hermes are in charge of piloting the plane with the women acting as stewardesses. On their first journey Fry and Hermes sleep causing the plane to crash on a mineral world. When arguing if Hermes or LaBarbara should be in charge, a native lifeform offers to help solve the problem by offering a series of tests. The men win the first test helped by Bender's lies. The next test is to find their way to the 'Cave of Harmony' which is the only safe place to reside when the Planet reaches its nearest part of the orbit around the sun and becomes too hot.

Neither gender reaches the cave in time thanks to negative traits of both genders; the men get lost and refuse to ask for directions while the women are unable to resist a mirage that looks like a shoe sale. Hermes and LaBarbara sneak into the opposite camps to steal Bender's gas compressor and Amana's (the refrigeration robot from the plane's galley) freon coil with the same idea of supercharging the freon with the gas compressor in order to keep cool. However Hermes and LaBarbara meet in-between both camps and discovering each other's theft declare both genders to be equal. They start arguing and then suddenly start to have sex and the next morning wake to find that they have overslept. The women start coughing from the fumes and the men are engulfed by boiling mercury.

Everybody then suddenly materializes in a cave and the rock alien is disappointed with them saying that he set the test so both genders would work together and their failure to do so means that he lost his bet with the Borax Kid. He then decides to remove their genders and everyone finds that their sexual organs have been removed. Everyone is much happier with no gender and get along much better, but Hermes and LaBarbara decide that they want their genitals back when they see that without genitals they can't have sex. The rock alien returns to restore their genders but inadvertently changes them to the opposite gender so the women become men and the men become women. Just as he is about to rectify his mistake, Zapp Brannigan arrives and shoots him and then starts to chat up the now female Fry.

Back at Planet Express headquarters, the newly male staff complain about their gender, while the (now) females are enjoying their new roles. The financial crisis is still looming, but since there is now a majority of female staff, the 'girly' calendar can go ahead. The calendar makes enough money in a day to put Planet Express back in business (because 'our fans are huge perverts') and the Borax Kid arrives and returns the crew back (along with the other genderbent characters) to their correct genders. Just after the Borax Kid leaves, Scruffy (still a woman) comes out of the girl’s bathroomand asks, "What'd I miss?"

Amy, Leela and Fry sleeping together 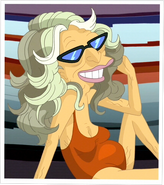 Mans
Community content is available under CC-BY-SA unless otherwise noted.