Old New York was heavily damaged or destroyed in 2308 by Bender, while working for the Nude people in Bender's Big Score. This destruction was first seen as part of the first episode, "Space Pilot 3000".

By 3000, New New York had become a cosmopolitan place rife with crime, vices, and corruption. Similar to the cultural melting pot of Old New York, New New York is home to a number of alien minorities, such as Little Neptune.

New New York is located in the northeastern United States on Earth, approximately halfway between Washington, D.C. and Boston. The location at the Hudson River delta, which feeds into a naturally sheltered harbor and then into the Atlantic Ocean, has helped the city grow in significance as a trading city. Much of the city is built on the three islands of Manhattan, Staten Island, and Long Long Island, which are built above the Old New York, making land scarce and encouraging a high population density. The city's land has been changed considerably by human intervention, with substantial land reclamation along the waterfronts.

The government of New New York is very centralized. It is responsible for public education, correctional institutions, libraries, public safety, recreational facilities, sanitation, water supply and welfare services. Mayor C. Randall Poopenmeyer is the elected mayor of New New York and has filled this function since at least the year 3000. 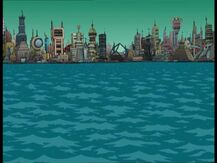