September 1, 2021: It is now required to have an account to edit here. Read the blog to see why this was necessary.

"A Fishful of Dollars"

Scruffy Scruffington (born October 31, 2945) (died 3014) is the Planet Express janitor. He originally started off as a minor character, who only made brief cameos in the background, until his speaking debut in "Anthology of Interest I". A recurring joke is that nobody remembers his name or ever seeing him before because of how little he's appeared. Over the seasons, Scruffy became more and more prominent.

It has been revealed that he owns 40,000 shares of Planet Express, more than anyone else, because he strongly believes in the company. He is lazy and can usually be found in the basement of the building, watching the boiler and reading an edition of Zero-G Juggs or National Pornographic. He almost always refers to himself in the third person. He seems to be quite profound, such as questioning whether violence really solves anything after killing a fly.

One of the few times he has been seen outside the Planet Express building is for the stock holders meeting in "Future Stock" and on Pluto for penguin hunting. He was also seen carting in the Beastie Boys, which may mean that he works for them or at least at the Madison Cube Garden, as well as at Planet Express. Scruffy also was seen saving the eco-feminist collective along with previous captives, although he wasn't held captive at all.

In the episode "Neutopia", Scruffy (along with many other main and recurring characters) had his gender swapped to the opposite gender. Scruffy was the only character who did not have his (her) gender reverted to normal at the end of the episode, as he was using the restroom at the time everyone else's genders were corrected. Despite this, Scruffy was shown to be his normal (male) self in "Benderama", implying the effects wore off.

In the episode "The Prisoner of Benda", it is revealed that his Robotic washbucket harbors romantic feelings for him which it confesses to when its personality is transferred to Amy's body. Scruffy tells Wash bucket that nothing can come of its love because deep down he knows that it's just 'janitorial equipment', he then tells Washbucket to leave before he asks it to stay. When Washbucket leaves he cries, implying that he returns its feelings.

In "Law and Oracle" it is revealed by the Professor that he was brought back from the dead as a zombie. This was reaffirmed in "Simpsorama", when Scruffy is beheaded, but is later walking around just fine.

Even though Bender Bending Rodríguez is the ship's cook, Scruffy seemed to be a better cook than him, regarding his corn biscuits. 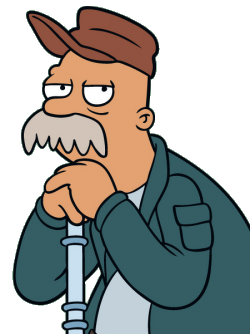