With a "no rain or sleet" attitude and a "kick-your-ass" grace, this delivery captain is a refreshing source of professionalism to counterpoint the rest of the crew. For better or worse, the ship runs on her high octane passions, be it because of her longing for family, her love of violence, her commitment to a job well done, or her affection for animals. She has been known to scrap the missions on a whim on the promise of learning more of her past, jeopardize the crew's lives to spite Zapp Brannigan, and save Nibbler. Leela was the first female Blernsball player and the worst player ever because of her poor depth perception (this is due to the fact that she has one eye). However, in space, depth perception is less useful because things are further away and so Leela is the captain of the Planet Express ship. Later on, she finally met her long lost parents, who turned out to be sewer mutants.

Leela is a tall, curvaceous, and muscular woman, with a single large eye that takes up most of her head. She has purple hair (inherited from Turanga Munda) which she usually ties in a ponytail, and she has a long cow-lick that hangs from her forehead.

She dresses in gray knee-high boots, black stretch pants, and a white tank top. Leela also wears a Wrist LoJack-a-mater on her right wrist, and can occasionally be seen wearing a bright green jacket. When she marries Philip J. Fry in "Meanwhile", she ties her hair into a bun whilst wearing her wedding dress.

While hiding from Yivo, Leela remarks to Amy that she won't have to trim her "elbow talons" any more, implying that she has been trimming them throughout the series to appear more human. Her eye and elbow talons appear to be her only visible mutant traits.

Leela is known for her extreme sensitivity and no-nonsense personality. She is a headstrong woman who focuses on work first and fun later. She is known for loving animals that are endangered, which led her to meeting Nibbler for the first time. She routinely rejects perverts such as Zapp Brannigan. She frequently learns from her mistakes and tries to right many wrongs. She is not impulsive by nature but is a careful planner (for example, she has been known to cook a month's worth of dinners in advance so she can freeze and then defrost the meals as needed).

Having grown up in the Cookieville Minimum-Security Orphanarium, Leela long-lived the lonely life of an orphan, thinking herself as the only member of an unknown alien race. It is not until her 20s that she discovers she is, in fact, the daughter of Turanga Morris and Turanga Munda, shamed sewer mutants from Earth's own degraded depths.[2] It would appear that she was born as a surprisingly unmutated Mutant, her only known mutations being purple hair, the elbow talons she usually shaves, a concessional appearance of a singing boil she named Susan and her distinct cyclops eye, she also occasionally lays an egg as stated in "Leela and the Genestalk" when she visits her parents. Leela was taught Kung-Fu by Master Fnog, who had crashed down on her dreams by telling her that she did not have "the will of the warrior" but the will of "a schoolmarm" or "housewife."

"Look, I don't know about your previous captains, but I intend to do as little dying as possible."
―The Series Has Landed

After growing up, Leela begins work at Applied Cryogenics as a Fate Assignment Officer, code number "1BDI" (one beady eye). When Leela meets Philip J. Fry, she becomes a job deserter in favor of piloting for Planet Express.[3] Leela lives alone in a small unfurnished apartment, "1I" (one eye) in New New York City.[4] She was named Orphan of the Year in 3000[5] and for a short while, Miss Universe.[6] Due to an accident, she and Kif Kroker have several children together, though Amy Wong, as Kif's "Fonfon Ru", is considered the mother.[7]

"Men who call too much are the worst... I bet."
―Amazon Women in the Mood

Leela had an ex-boyfriend named Sean: uneducated, unambitious, pasty, and hunched, with an incredible, beautiful creative soul and musical talent. Their breakup may not have been entirely mutual, judging by the fact that Leela stresses how mutual it was every chance she can and that she believed he was cheating on her. Apparently, he told his wife that she was crazy and he dumped her. She went on at least one date with Doug.[8] Leela dated the Dean of Mars University after Fratbots won a boating race, however, he didn't call her after one date.[9]

Leela started dating Adlai Atkins, an orphan she grew up with after she reconnected with him as an adult. They became engaged after he performed phaser eye surgery on her but they broke up after Leela realized he didn't like her the way she was.[10] Leela dated Chaz, the mayor's aide, but she broke up with him after she realized he thought he was too important for most everyone.[11] While stranded on Omega 3, Leela has a quick fling with William Shatner.[12] Leela almost married Alcazar after he tricked her into thinking they were the last of their race.[13] Leela gets engaged to Yivo, along with the rest of the universe.[14] Leela made out with Amy Wong during the battle at Wipe Castle.[15]

Leela met Zapp en route to Vergon 6. She took pity on him and had sex with him, something she regrets constantly.[16] Zapp believes he still has a chance with Leela and hits on her every time they meet. Bender frequently reminds Leela about her one night stand with Zapp, to her disgust. Zapp makes an attempt to convince Leela that they will be the new Adam and Eve in the episode, In-A-Gadda-Da-Leela. Leela even got very upset when Zapp started dating her mom and got very close to marrying her.[17]

Leela first met Bender when she was chasing after Philip J. Fry before later working together at Planet Express. Although they are seen as friends, they rarely seem to agree with one another or even enjoy each other's company, due to Leela's un-impulsive nature and Bender being the subsequent opposite. After Bender flushed Nibbler down the toilet, the Professor installed an empathy chip in Bender, allowing him to feel Leela's emotions. The act initially seemed to bond the two, but it was later revealed that the empathy chip had to be running at triple capacity to get Bender even close to Leela's true feelings. When Bender asked Leela what she likes most about him, she commented that she liked his "in-your-face attitude."

Relationships with other members of Planet Express

Leela's relationships with the rest of the Planet Express crew differs from time to time. Though she mostly spends time with Bender, she sometimes hangs around Zoidberg, Hermes, as well as the Professor. However, apart from Bender and Fry, she hangs out most with Amy Wong. She first met Amy after joining Planet Express and didn't think much of her. She was shocked when Amy saved her life by flying to their rescue in the Planet Express ship. Leela and Amy's friendship is hot and cold at times, and Amy often feels jealous of her because she is considered prettier and has better success with men. 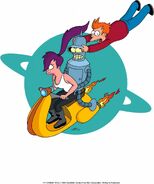 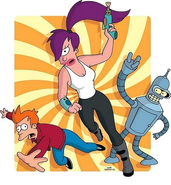 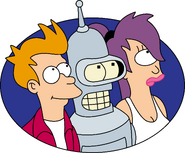 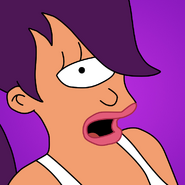 Leela in her undies 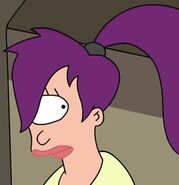 Fry and Leela kiss in "Fun on a Bun"

Leela as a child

Leela in bed with Fry